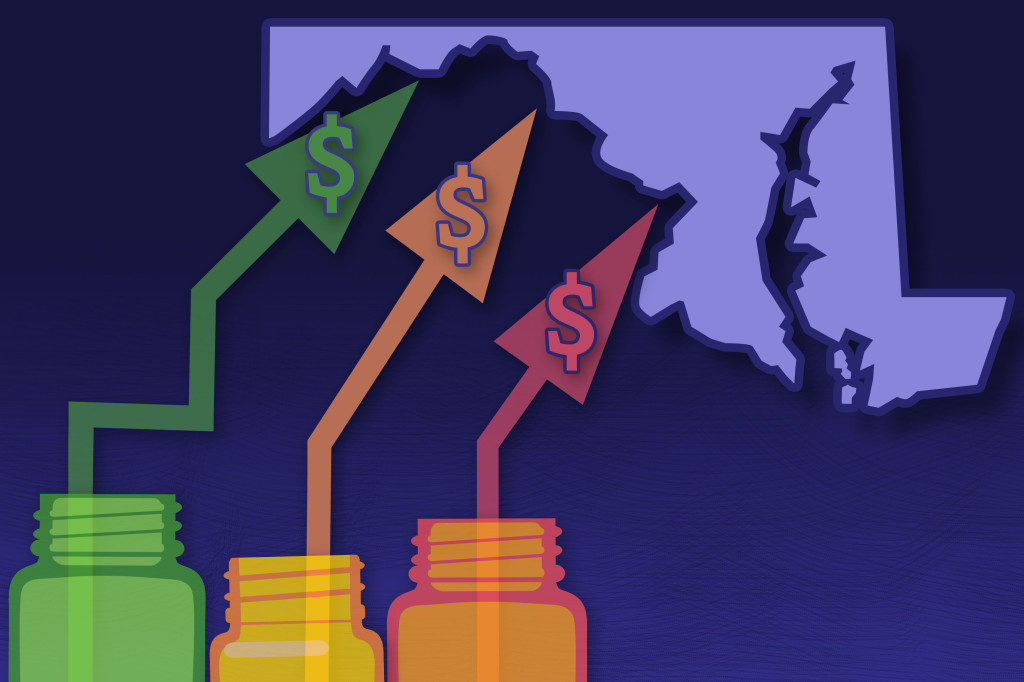 Updated, 12:26 p.m. This story was updated to reflect that a federal judge rejected a request to block the Maryland law from going forward.

Lawmakers in Maryland are daring to legislate where their federal counterparts have not: As of Oct. 1, the state will be able to say “no” to some pharmaceutical price spikes.

A new law, which focuses on generic and off-patent drugs, empowers the state’s attorney general to step in if a drug’s price climbs 50 percent or more in a single year. The company must justify the hike. If the attorney general still finds the increase unwarranted, he or she can file suit in state court. Manufacturers face a fine of up to $10,000 for price gouging.

As Congress stalls on what voters say is a top health concern — high pharmaceutical costs — states increasingly are tackling the issue. Despite often-fierce industry opposition, a variety of bills are working their way through state governments. California, Nevada and New York are among those joining Maryland in passing legislation meant to undercut skyrocketing drug prices.

Maryland, though, is the first to penalize drugmakers for price hikes. Its law passed May 26 without the governor’s signature.

The state-level momentum raises the possibility that — as happened with hot-button issues such as gay marriage and smoke-free buildings — a patchwork of bills across the country could pave the way for more comprehensive national action. States feel the squeeze of these steep price tags in Medicaid and state employee benefit programs, and that applies pressure to find solutions.

“There is a noticeable uptick among state legislatures and state governments in terms of what kind of role states can play in addressing the cost of prescription drugs and access,” said Richard Cauchi, health program director at the National Conference of State Legislatures.

Many experts frame Maryland’s law as a test case that could help define what powers states have and what limits they face in doing battle with the pharmaceutical industry.

The generic-drug industry filed a lawsuit to block the law from taking effect, arguing it’s unconstitutionally vague and an overreach of state powers. A federal court judge on Friday denied their request for an injunction.

The state-level actions focus on a variety of tactics:

“Transparency bills” would require pharmaceutical companies to detail a drug’s production and advertising costs when they raise prices over certain thresholds.
Cost-limit measures would cap drug prices charged by drugmakers to Medicaid or other state-run programs, or limit what the state will pay for drugs.
Supply-chain restrictions include regulating the roles of pharmacy benefit managers or limiting a consumer’s out-of-pocket costs.

A New York law on the books since spring allows officials to cap what its Medicaid program will pay for medications. If companies don’t sufficiently discount a drug, a state review will assess whether the price is out of step with medical value.

“It’s a really innovative approach. States are looking at how to replicate it, and how to expand on it,” said Ellen Albritton, a senior policy analyst at the left-leaning Families USA, which has consulted with states including Maryland on such policies.

Lawmakers have introduced similar legislation in states such as Massachusetts, Rhode Island, Tennessee and Montana. And in Ohio voters are weighing a ballot initiative in November that would limit what the state pays for prescription drugs in its Medicaid program and other state health plans.

Meanwhile, the California legislature passed a bill earlier in September that would require drugmakers to disclose when they are about to raise a price more than 16 percent over two years and justify the hike. It awaits Democratic Gov. Jerry Brown’s signature.

In June, Nevada lawmakers approved a law similar to California’s but limited to insulin prices. Vermont passed a transparency law in 2016 that would scrutinize up to 15 drugs for which the state spends “significant health care dollars” and prices had climbed by set amounts in recent years. 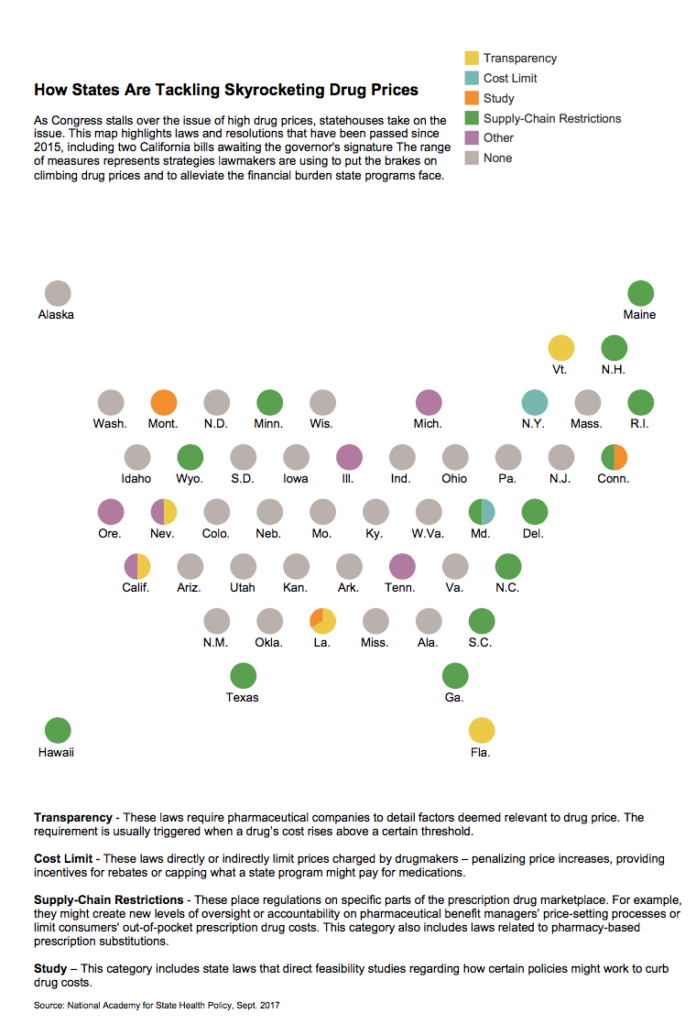 But states face a steep uphill climb in passing pricing legislation given the deep-pocketed pharmaceutical industry, which can finance strong opposition, whether through lobbying, legal action or advertising campaigns.

Last fall, voters rejected a California initiative that would have capped what the state pays for drugs — much like the Ohio measure under consideration. Industry groups spent more than $100 million to defeat it, putting it among California’s all-time most expensive ballot fights. Ohio’s measure is attracting similar heat, with drug companies outspending opponents about 5-to-1.

States also face policy challenges and limits to their statutory authority, which is why several have focused their efforts on specific parts of the drug-pricing pipeline.

Critics see these tailored initiatives as falling short or opening other loopholes. Requiring companies to report prices past a certain threshold, for example, might encourage them to consistently set prices just below that level.

Maryland’s law is noteworthy because it includes a fine for drugmakers if price increases are deemed excessive — though in the industry that $10,000 fine is likely nominal, suggested Rachel Sachs, an associate law professor at Washington University in St. Louis who researches drug regulations.

And its focus on generics means that branded drugs, such as Mylan’s Epi-Pen or Kaleo’s overdose-reversing Evzio, wouldn’t be affected.

Yet there’s a good reason for this, noted Jeremy Greene, a professor of medicine and the history of medicine at Johns Hopkins University who is in favor of Maryland’s law.

Current interpretation of federal patent law suggests that the issues related to the development and affordability of on-patent drugs are under federal jurisdiction, outside the purview of states, he explained.

In Maryland, “the law was drafted narrowly to address specifically a problem we’ve only become aware of in recent years,” he said. That’s the high cost of older, off-patent drugs that face little market competition. “Here’s where the state of Maryland is trying to do something,” he said.

KHN’s coverage of prescription drug development, costs and pricing is supported in part by the Laura and John Arnold Foundation.