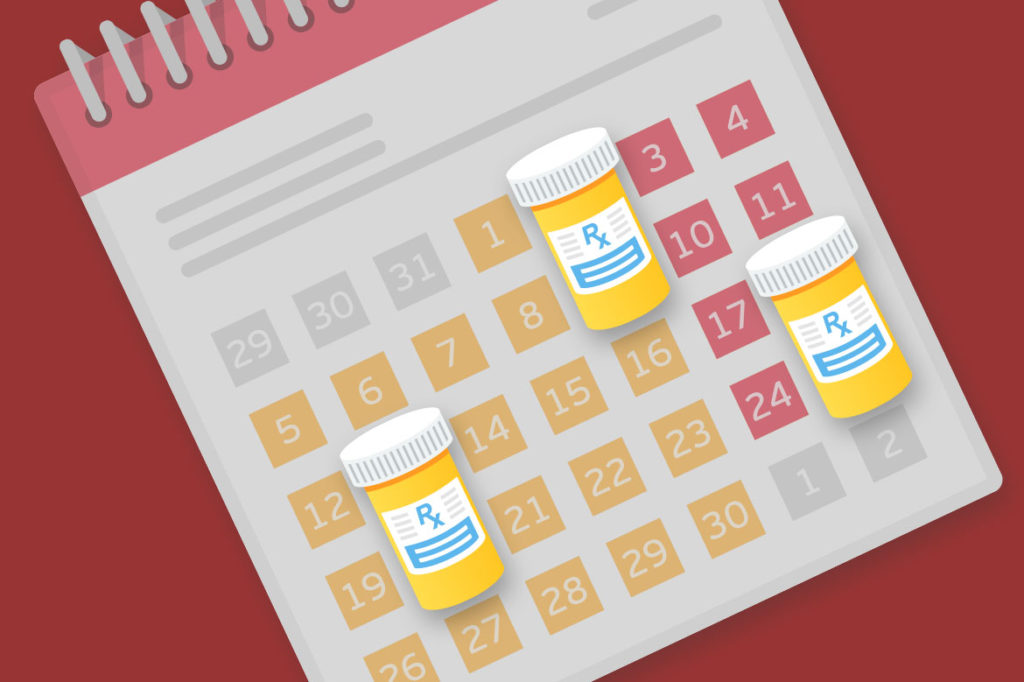 For People who take multiple medications to manage chronic conditions, traipsing back and forth from the pharmacy to pick up pills can make it harder to stick to their doctors’ orders. But because insurers often don’t allow consumers to fill partial prescriptions to make medication renewal dates align, patients sometimes have no choice but to frequently shuttle to the drug store for refills.

Starting next year, that will change in Florida when the state’s new medication synchronization law goes into effect. The law, passed this year, requires insurers to let enrollees align the refill dates for most drugs at in-network pharmacies at least once during their insurance plan year. The insurers must pro-rate patient co-payments for partial refills.

Generally, prescriptions for chronic conditions are renewed every 30 days. Insurers often balk at covering a refill of a drug sooner than that, leaving patients to make a full copayment even if their doctor writes a prescription for a partial order.

The Medicare program allows beneficiaries with Part D drug plans to request less than a full month’s supply of a drug and pay a pro-rated amount.

Consumer advocates say medication synchronization isn’t as serious a problem as not having coverage for the specific drugs or not being able to afford them because of high cost sharing. Still, the hassle factor of making multiple monthly trips to the pharmacy to get their drugs increases the odds that people will miss important medications.

The new law will make a big difference for HIV patients, many of whom take at least five HIV drugs and may need medications for other conditions such as high blood pressure or diabetes, said Michael Ruppal, executive director at the Tampa-based AIDS Institute, which advocated for the bill. He cited as an example one HIV patient who was on 11 medications, some of which he received through the mail and others that he picked up at two different retail pharmacies.

“People make all these multiple stops on different dates,” Ruppal said. “He had to track it all on a calendar.”

Florida, despite being a magnet for retirees, many of whom have chronic conditions, is hardly one of the first states to address this issue. Since 2014, about two dozen states have passed laws or put regulations in place requiring medication synchronization, said Fara Klein, manager of state government affairs at the National Community Pharmacists Association.

In addition to making it easier for patients to stick to their drug regimens, the new law may encourage patients to have conversations with their pharmacists at least once a year. When they align the drug renewals, they can also ask questions about how to take a drug, side effects and drug interactions, say advocates.

“For people who are over 50, it’s so important that pharmacists will be looking out to make sure there are no bad drug interactions,” said Dorene Barker, associate state director for AARP Florida.

Please visit khn.org/columnists to send comments or ideas for future topics for the Insuring Your Health column.