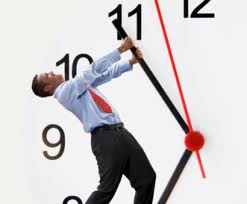 “Simple can be harder than complex: You have to work hard to get your thinking clean to make it simple. But it’s worth it in the end because once you get there, you can move mountains.” – Steve Jobs

No matter how you slice or dice it, there are only 24 hours in the day. We all know it, yet for some reason we try to manage them as if they were, well, manageable. You try organizing your time through checklists and meetings. But meetings just take up more time and while checklists may provide some satisfaction, usually all they do is serve as a reminder of all the things you did not get done. Forget about moving mountains, you feel accomplished to just move a mole hill. You are in luck though— there is hope! It’s just a matter of shifting your mindset from trying to manage your time to managing your attention and focusing on the simple rather than the complex.

All you need is a little help from Dwight D. Eisenhower. You may know that Eisenhower served as our 34th President of the United States from 1953 until 1961; before his days in the White House, he served as the Supreme Allied Commander in Europe during World War II. What you may not know is that during his time in Europe he used what is now referred to as the Eisenhower Method for completing tasks.

Eisenhower used a square divided into four quadrants to determine which tasks required his attention: One axis split the quadrants into important and unimportant; the other axis split them into urgent and not urgent. The tasks that fell within the important/urgent sector were completed personally and immediately by Eisenhower himself. Important/not urgent items were scheduled at a later date and personally completed by Eisenhower, and unimportant/urgent items were delegated to others under his command. Items that landed within the unimportant/not urgent quadrant were dropped off his radar completely — there’s no point in completing a task that’s neither important nor urgent.

Your key to success is knowing when to do something and when to delegate it to someone else. It often seems easier to try to do everything yourself. After all, we’ve been taught that if you want something done, then do it yourself. But delegating opportunities to your staff empowers them and gives them a sense of pride in ownership of those tasks.  Another hurdle is saying “no” when asked for something. It may seem difficult at first, but saying “no” allows you to say “yes” for the things are truly important. Keep it simple, and remember that the key to successful time management is letting go of the notion that time can be managed. Instead, focus on what can be managed: your attention.

Scot Maitland is the founder and publisher of Pharmacy Marketing Quarterly, a one-stop “shop” for information on how to market, communicate and  sell services targeted specifically to independent pharmacy.