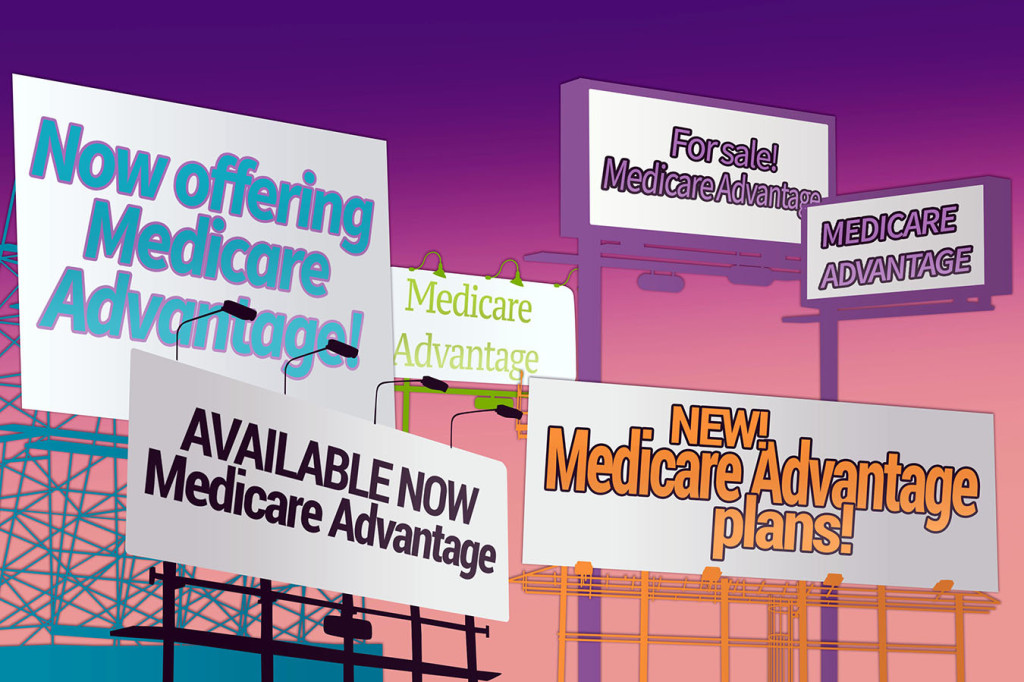 Health care experts widely expected the Affordable Care Act to hobble Medicare Advantage, the government-funded private health plans that millions of seniors have chosen as an alternative to original Medicare.

To pay for expanding coverage to the uninsured, the 2010 law cut billions of dollars in federal payments to the plans. Government budget analysts predicted that would lead to a sharp drop in enrollment as insurers reduced benefits, exited states or left the business altogether.

But the dire projections proved wrong.

Since 2010, enrollment in Medicare Advantage has doubled to more than 20 million enrollees, growing from a quarter of Medicare beneficiaries to more than a third.

“The Affordable Care Act did not kill Medicare Advantage, and the program looks poised to continue to grow quite rapidly,” said Bill Frack, managing director with L.E.K. Consulting, which advises health companies.

And as beneficiaries get set to shop for plans during open enrollment — which runs from Monday through Dec. 7 — they will find a greater choice of insurers.

Fourteen new companies have begun selling Medicare Advantage plans for 2019, several more than a typical year, according to a report out Monday from the Kaiser Family Foundation. (KHN is an editorially independent part of the foundation.)

Overall, Medicare beneficiaries can choose from about 3,700 plans for 2019, or 600 more than this year, according to the federal government’s Centers for Medicare & Medicaid Services. 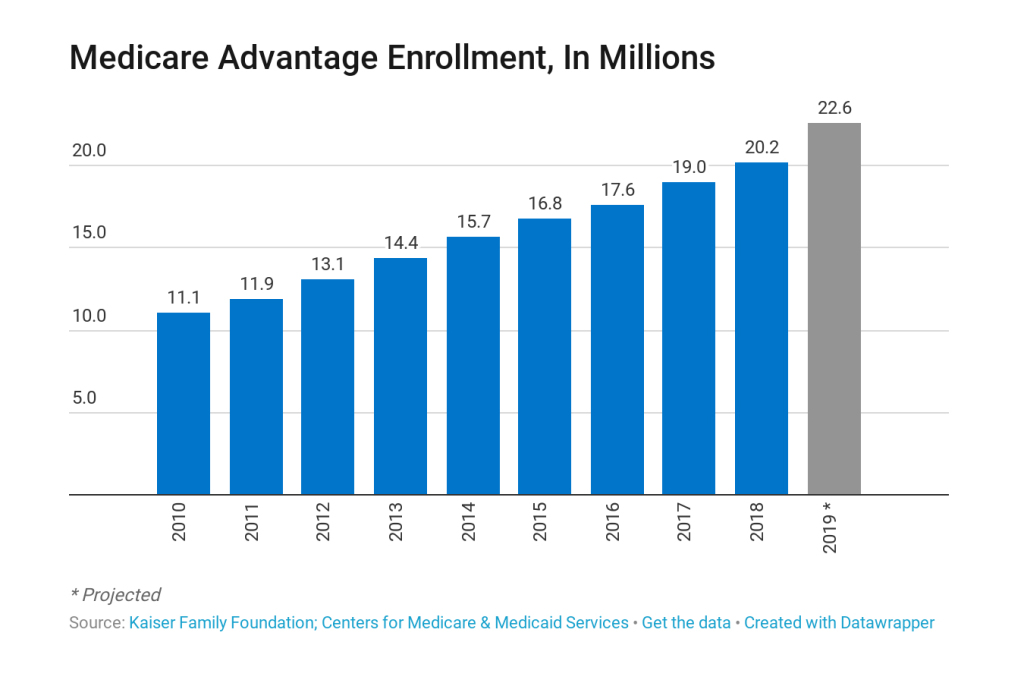 With about 10,000 baby boomers aging into Medicare range each day, the general view of the insurance industry, said Robert Berenson, a Medicare expert with the nonpartisan Urban Institute, “is that their future is Medicare and it’s crazy not to pursue Medicare enrollees more actively.”

Bright Health, Clover Health and Devoted Health, all for-profit companies, began offering Medicare Advantage plans for 2018 or will do so for 2019.

Mutual of Omaha, a company owned by its policyholders, is also moving into Medicare Advantage for the first time in two decades, providing plans in San Antonio and Cincinnati.

Some nonprofit hospitals are offering Medicare plans for the first time too, such as the BayCare Health system in the Tampa, Fla., area.

While Medicare beneficiaries in most counties have a choice of several plans, enrollment for years had been consolidated into several for-profit companies, primarily UnitedHealthcare, Humana and Aetna, which have accumulated just under half the national enrollment.

These insurance giants are also expanding into new markets for next year. Humana in 2019 will offer its Medicare HMO in 97 new counties in 14 states. UnitedHealthcare is moving into 130 new counties in 13 states, including for the first time Minnesota, its headquarters for the past four decades.

Seniors have long been attracted to Advantage plans because they often include benefits not available with government-run Medicare, such as vision and dental coverage. Many private plans save seniors money because their premiums, deductibles and other patient cost sharing are lower than what beneficiaries pay with original Medicare. But there is a trade-off: The private plans usually require seniors to use a restricted network of doctors and hospitals.

The federal government pays the plans to provide coverage for beneficiaries. When drafting the ACA, Democratic lawmakers targeted the Medicare Advantage plans because studies had shown that enrollees in the private plans cost the government 14 percent more than people in the original program.

Medicare plans weathered the billions in funding cuts in part by qualifying for new federal bonus payments available to those that score a “4” or better on a five-notch scale of quality and customer satisfaction.

Health plans also gained extra revenue by identifying illnesses and health risks of members that would entitle the companies to federal “risk-adjustment” payments. That has provided hundreds of billions in extra dollars to Medicare plans, though congressional analysts and federal investigators have raised concerns about insurers exaggerating how sick their members are.

A study last year found that those risk adjustments could add more than $200 billion to the cost of Medicare Advantage plans in the next decade, despite no change in enrollees’ health.

For-profit Medicare Advantage insurers made a 5 percent profit margin in 2016 — twice the average of Medicare plans overall, according to the Medicare Payment Advisory Commission, which reports to Congress. That’s slightly better than the health insurance industry’s overall 4 percent margin reported by Standard & Poor’s.

Those profit margins could expand. The Trump administration boosted payments to Medicare Advantage plans by 3.4 percent for 2019, 0.45 percentage points higher than the 2018 increase.

Betsy Seals, chief consulting officer for Gorman Health Group, a Washington company that advises Medicare Advantage plans, said many health plans hesitated to enter that market or expand after President Donald Trump was elected because they weren’t sure the new administration would support the program. But such concerns were erased with the announcement on 2019 reimbursement rates.

“The administration’s support of the Medicare Advantage program is clear,” Seals said. “We have seen the downstream impact of this support with new entrants to the market — a trend we expect to see continue.”

Getting Consumers To Switch

Since the 1960s, Mutual of Omaha has sold Medicare Supplement policies — coverage to help beneficiaries in government-run Medicare pay the portion of costs that program doesn’t pick up. But the company only briefly entered the Medicare Advantage business once — in its home state of Nebraska in the 1990s.

“In the past 10 or 20 years it never seemed quite the right time,” said Amber Rinehart, a senior vice president for the insurer. “The main hindrance was around the political environment and funding for Medicare Advantage.”

Yet after watching Medicare Advantage enrollment soar and government funding increase, the insurer has decided now is the time to act. “We have seen a lot more stability of funding and the political tailwinds are there,” she said.

One challenge for the new insurers will be attracting members from existing companies since beneficiaries tend to stick with the same insurer for many years.

Vivek Garipalli, CEO of Clover Health, said his San Francisco-based company hopes to gain members by offering low-cost plans with a large choice of hospitals and doctors and allowing members to see specialists in its network without prior approval from their primary care doctor. The company is also focused on appealing to blacks and Hispanics who have been less likely to join Medicare Advantage.

“We see a lot of opportunity in markets where there are underserved populations,” Garipalli said.

BayCare, based in Clearwater, Fla., is offering a Medicare plan for the first time in 2019.

“We think there is enough market share to be had and we are not afraid to compete,” said Jim Beermann, vice president of insurance strategy for BayCare.

Hospitals are attracted to the Medicare business because it gives them access to more of premium dollars directed to health costs, said Frack of L.E.K. Consulting. “You control more of your destiny,” he added.